Nozawa Onsen Ski Resort has just released lift prices for the coming 2019/20 Season. As was expected there has been a slight increase across the board. It is only the second increase in about 15 Years and still sone of the best value skiing in the world.

Children and aged 6-15 Years. If 5 and Under it is free to ski if with a paying Adult 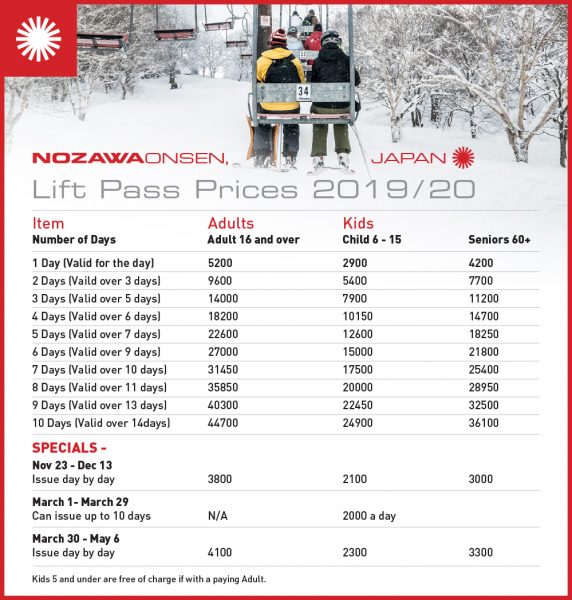 Overall not a huge change from the past seasons but they probably needed to put them up a bit due to the following;

We get a lot of guests from Australia and they often say Nozawa is twice the snow for half the price compared to Australian resorts. Here is a table of ski resorts around the world and their lift ticket prices in $US; Source snowboard.com https://www.snowboard.com/news/top-stories/lift-tickets/

The most popular lift pass we sell is 6 days which was 26000 Yen last year and is 27000 Yen this year which works out at 4500 Yen a day or actually $US40 a day which puts us in 4th spot after Morocco! That is just $AUD57 a day for all the Aussie guests for less than Half price of Thredbo!