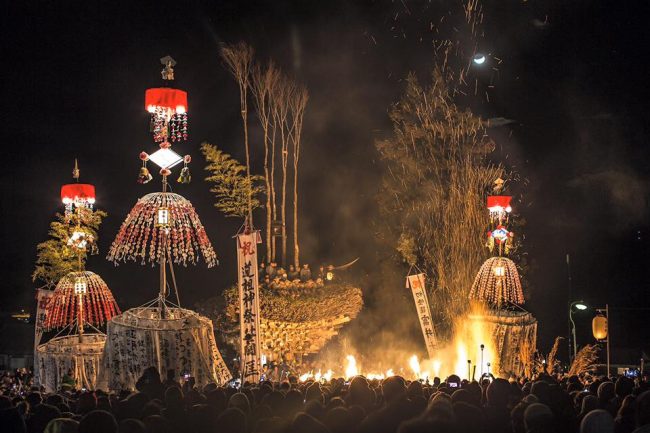 The Nozawa Onsen Fire Festival is one of Japan’s top three fire festivals and needless to say, a real treat to experience.

It is held on January 15th each year to pray for a plentiful harvest, health and good fortune during the year to come. The festival dates back to 1863 and though the location has changed, the festivities remain the same. 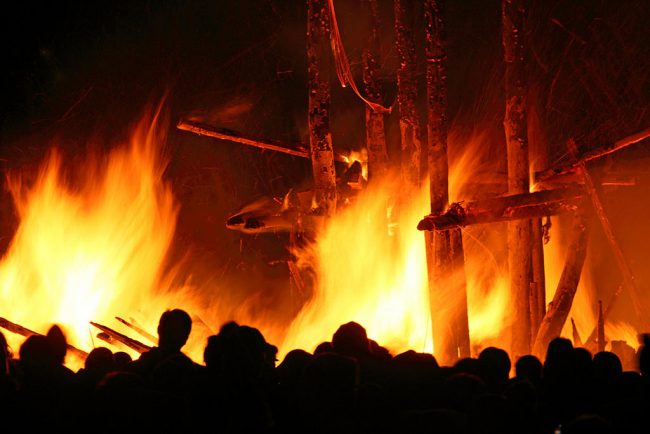 During this festival, the twenty-five and forty-two-year-old men from the village play a very important role. An old belief in Japan dictates that, for men, these years are unlucky ages. The twenty-five and the forty-two-year-old men in their unlucky ages construct the shaden (shrine) from beech wood that reaches a height of 18 metres. Every year it takes 100 villagers to build the shrine.

The trees are cut down in October and brought down from the mountain, through the village, on January 13th (starting about 1 pm at the Hikage area). After the shaden has been constructed, the priest from Kosuge Shrine performs a ceremony to endow it with a God. 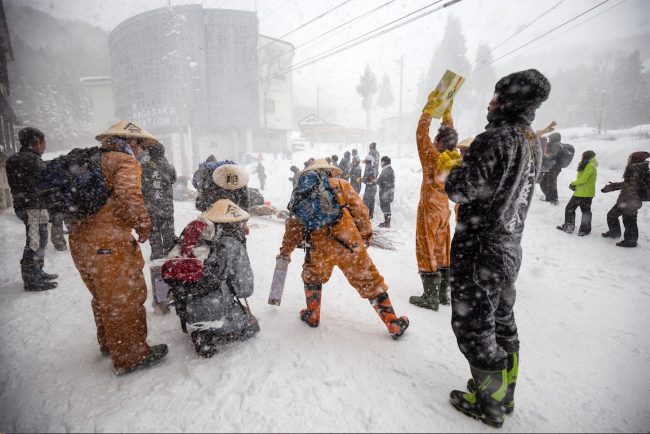 Along with the shaden, there is an average of five tōrō (dedicatory lantern poles) erected every year. These poles are made by a family in the village to celebrate the birth of their first son. The tōrō are offered to the Gods in prayer for health and good fortune. 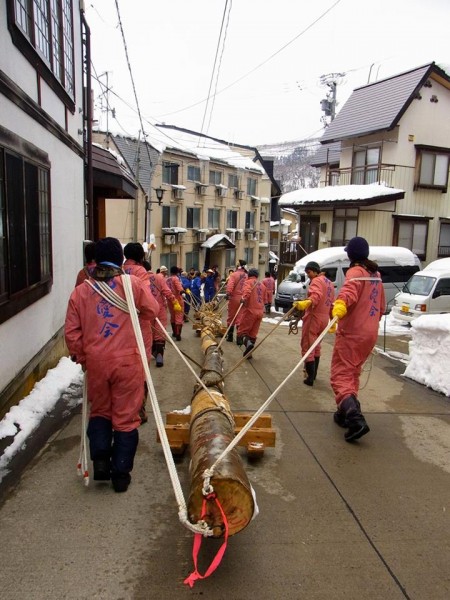 The festivities begin with the lighting of the fire by the twenty-five and forty-two-year-old men. A small group of men carry a torch, which is lit by striking two stones together, from the Kono residence to the festival grounds. The torch is used to start a bonfire from which the handmade torches used to attack the shrine are lit.

The festival centres around the shaden, where the forty-two-year-olds sit on top and the twenty-five-year-olds stand guard at the base. Those who are 41 and 43 years old stand around the perimeter to protect the spectators. Torch-bearing villagers of all ages attempt to break through the guards and light the shaden on fire. 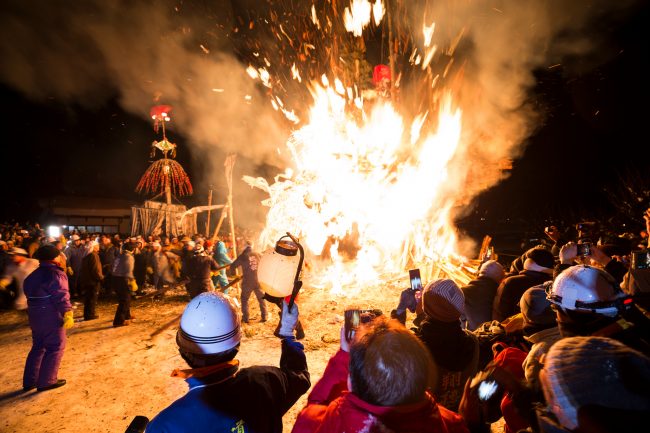 A dangerous and lively battle ensues. The defenders try to put out the fire by striking it with pine branches. The attack lasts for about one hour, after which the 42-year-olds call an end to the ceremony and the shaden, together with the tōrō, are set on fire in an offering to the Gods.

The entire festival can take up to four hours from beginning to end but the main attraction is the battle between the guards and the torch-bearing villagers. 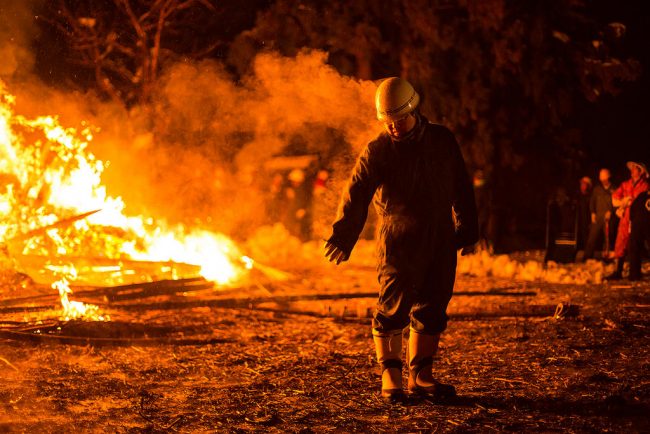 20:00; Fireworks and the Dosojin drummers

20:30; Kids and dignitaries start with the fire lighting 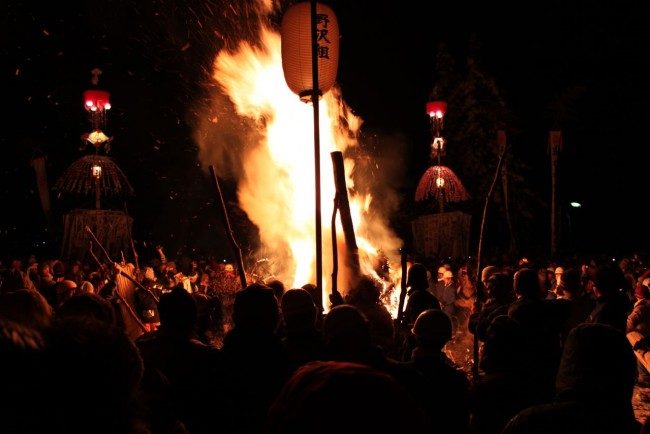 Rules of the Dosojin Fire Festival

1. The lighting of the fire and challenging is restricted to local villagers only. No
one else is allowed to enter the roped off area.
2. Do not throw any objects. Respect people around you and don’t chant.
3. Only participating members are allowed to climb the shrine (42-year-old villagers)
4. No drinking in the arena except for participants in the festival. Take all rubbish when you leave.
5. Please take care of friends and have the name of your lodge or bus company on you somewhere, perhaps in a lift pass armband.
6. We do not take responsibility for any damage or injury. Take care of nylon clothing as it can easily burn. It’s probably best not to bring valuable items with you.
7. This festival is a tradition that has been running since 1863. We ask you to please respect the local customs.
Have fun but behave and take care. 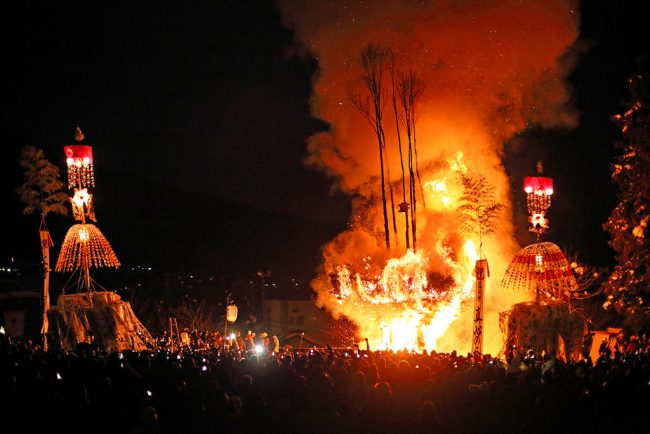 As we can all appreciate, winter is our busiest time of the year and especially so during the Fire Festival. With this in mind, it’s never too early to start planning your ski trip to coincide with next year’s event. Check out the many accommodation options or send us an enquiry at stay@nozawaholidays.com.