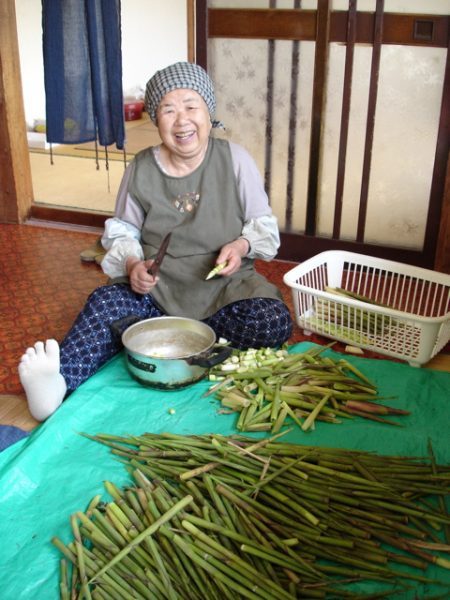 While January’s Fire Festival may lay claim to being Nozawa Onsen’s most popular and well-known festival, it certainly isn’t the only one!

June’s Take no Ko Matsuri or “Baby Bamboo Festival” is a fun festival to witness. It goes for over a week and brings a night market vibe to the centre of town.

This year, the festival runs from the 8th to the 17th of June. Being held in during the warmer months outside the ski season, it’s not as busy as the Fire Festival. It also means that it’s the perfect time to sit outside and soak up the atmosphere with a cold beer (or two) and a tasty BBQ bamboo stick!

This particular festival takes place in June because this is the time of the year where the bamboo shoots begin to present themselves in the forests around Nozawa Onsen. In other parts of Japan, the more mature bamboo shoots tend to be a little more popular, however, in this area, the baby shoots are favoured for their relative sweetness and softer texture. So, the locals will pick the shoots along with other wild vegetables.

Every evening from the 8th to the 17th, you’ll find the laneway behind Kawahara Yu Onsen (below Kaze no Iie Italian restaurant) transform into a night market and really come to life!

The whole of the Green Season is obviously a totally different vibe to the ski season. There are fewer people around but those who are here might argue there’s more to do. Activities are numerous but much of the appeal is the opportunity to immerse yourself in a traditional farming village. Nozawa Onsen is fortunate to be in the unique position of being accessible for native English speakers but while also remaining an insight into the real Japan.

Just don’t tell too many people…