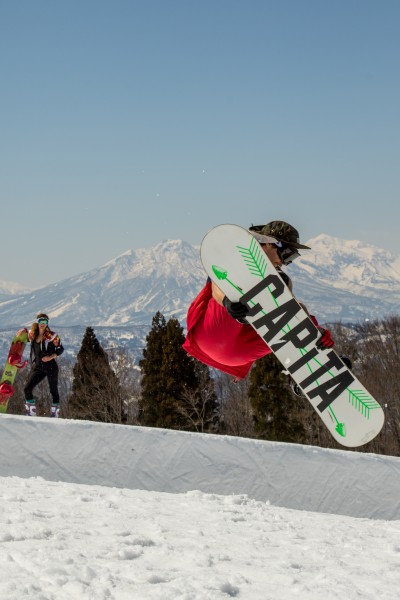 What a beautiful day yesterday was. The sun was shining and the temperatures were warm. It was a t-shirt kind of day. Conditions at the top of the mountain stayed fairly good all day given the warmth. Uenotaira was still good, becoming a bit sticky later in the day, though the park and halfpipe were popular all day long. lower down on the mountain the snow became fairly slushy and a few slopes have become somewhat patchy.

It’s looking like it’ll be another beautiful morning; cooler temperatures overnight should have hardened up the snowpack and the groomers will have made things nice and smooth again. Temperatures will be hovering around 5 degrees up top, so we’re in for another warm one. clouds are expected to start moving in bringing some rain with them. Rain may continue while it stays warm for today and tomorrow, and as the temperature drops tomorrow evening we should start to see snow forming up on the mountain. This snow is predicted to fall over a couple of days so it should be a good week ahead. There’s some heavy snow predicted for later in the week so we’ll see how that plays out. Fingers crossed!